Showcasing a range of instrumental and vocal groups from schools and music centres, our Summer Gala was a high-energy and exciting celebration of the vibrancy and quality of music-making in Lewisham.

On Thursday 27 June 2019 Southbank Centre’s Royal Festival Hall was overtaken by over 1000 fantastic young musicians and singers from Lewisham which included the premiere performance of Endurance, a new work for over 800 young singers based on the life story of Lewisham resident Ernest Shackleton, by James Redwood and Hazel Gould.

Have a look at at the Summer Gala programme…

An acclaimed urban choir from Sedgehill School who dazzled with their renditions of Nobody and Diamonds.

A fantastic amalgamation of singing and instrumental music, stunning the crowd with a medley from Grease and This Is Me from The Greatest Showman.

Out of school ensembles delivered by Lewisham Music with a finely tuned display of instrumental artistry including La Bombonera, Mambo from West Side Story, and Soul Bossa Nova.

An exciting West African dance and drumming collective who brought the audience to their feet with an ethereal performance of Moribayassa, a traditional piece of West African music.

In the second half over 800 young singers from 27 schools gathered on stage to perform Endurance, a specially commissioned piece by Lewisham Music for the Summer Gala, composed and written by James Redwood and Hazel Gould.

The crowd were left speechless as the massed voices sung in absolute harmony, guiding eyes and ears through 12 stunning movements over 20 minutes!

Young musicians from all of the performing ensembles worked incredibly hard with music leaders and teachers in the borough, in order to present a challenging and exhilarating programme on a professional stage. Peter Hayward, Chief Executive of Lewisham Music noted that ‘our children and young people have taken up the challenge and worked very hard this term to prepare for what I know is going to be a unique and spectacular evening of music on one of the world’s leading concert stages.’

Abimaro Gunnell said: ‘Being part of a piece that focuses on a story that to me seems all about failing successfully, is hugely inspiring, and although an old story it still has so much relevance for today.   Singing alongside professionals and young people starting out on their own voyage of life, is also incredibly appropriate for this tale about adventure, overcoming and pressing on despite the challenges that life might bring!’

Robert Hayward said: ‘It’s a thrilling experience for me to be singing in a new piece of music involving hundreds of children learning about a hero who overcame adversity to save lives in the most challenging circumstances. It is young people leading the way.’

A massive thank you to everyone who was involved – Lewisham is the best!! 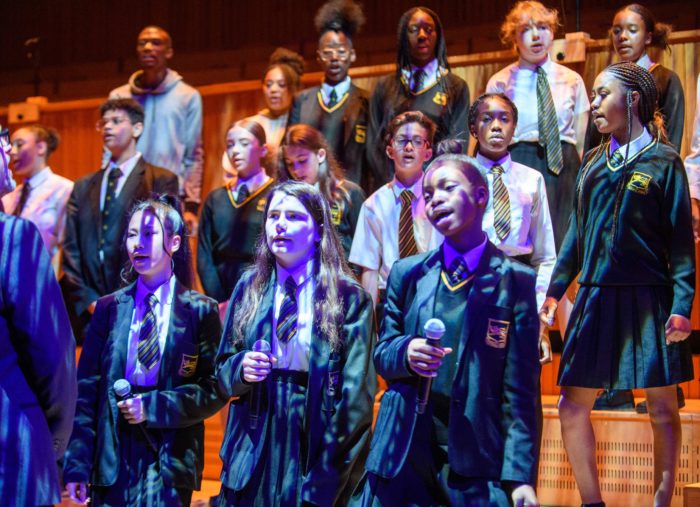 Have a look at some of the photos from our Summer Gala.